The design sense of the gas station is also one of the important means to attract customers to refuel. These roadside gas stations show a really amazing architectural style.

Let’s take a look at the design of the 20 best-looking gas stations in the world.

This is Spain’s REPSOL Services. It uses a modular “umbrella” as a raiya in front of the station. The color of the canopy uses the red, white and yellow of the REPSOL trademark color. The “umbrella” is in the form of pyramids, and the top of the canopy itself is arranged in the predetermined order to ensure that the red canopy is always the highest. This color combination creates a strong three-dimensional image and clearly breaks the traditional appearance of the established gas station. 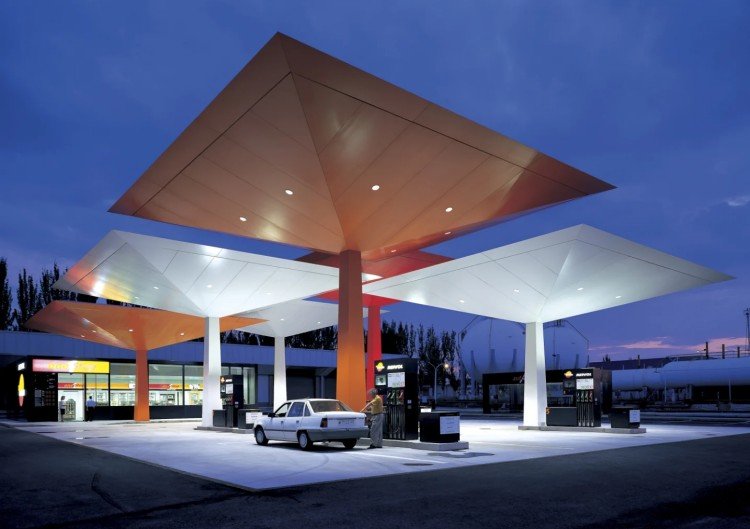 This funnel station is located in Slovakia. It is a reinforced concrete building with a very similar shape like three huge funnels. The top of the funnel is three levels of disc -shaped buildings. The smooth curve outlines the appearance of the building perfectly. The elevated lighting lights of the gas station are installed inside the ceiling. Such a design also makes the entire building more aesthetically significant. 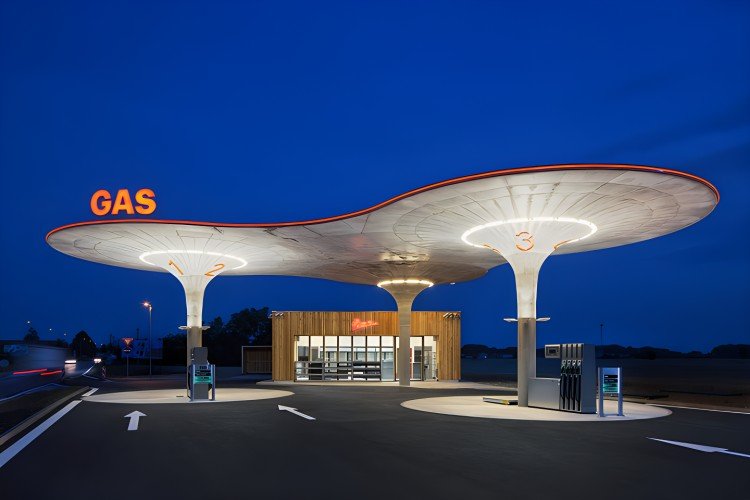 The Helios House of L. A is a futuristic gas station, known as the first green gas station in the world. The building materials are all renewable steel. There are 90 solar panels on the ceiling. The rainwater collection system collects the plants in the rainwater car washing or irrigated gas stations. The lights at night are also very beautiful, which is also the first gas station to obtain Leed gold certification. 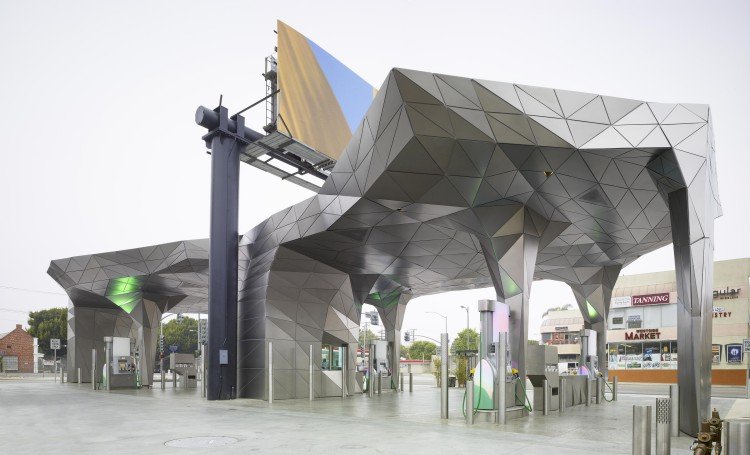 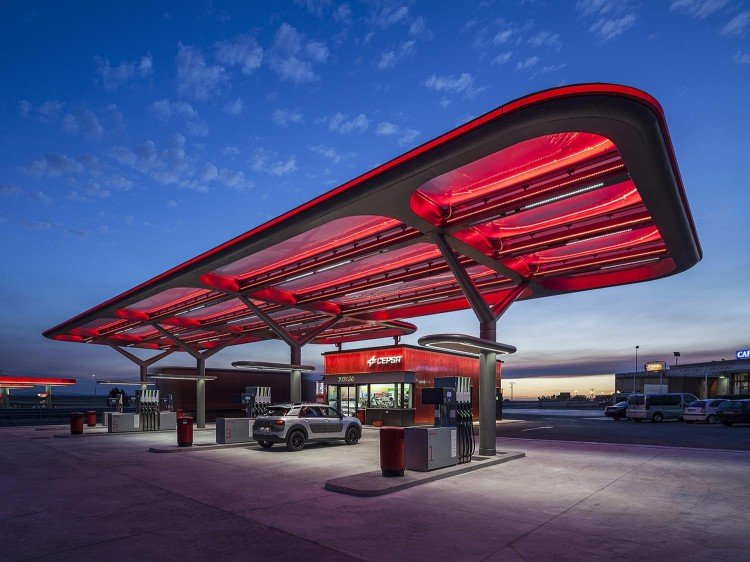 Located in the bomber gas station in Wokki, USA, after World War II, its owner Art Lacey purchased a Boeing B-17 around bomber from an air force base in Oklahoma. Essence For decades, the B-17 has been a part of the gas station, which not only provides the role of covering the wind and rain but also attracted visitors to visit this famous bomber gas station 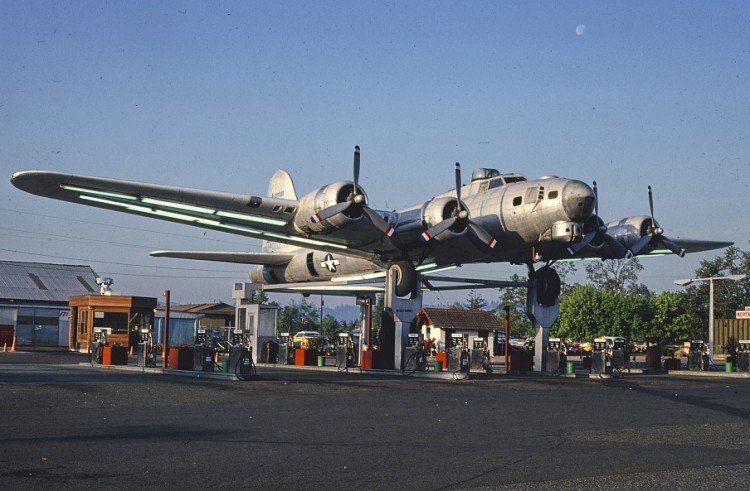 This is Gori Highway, which is connected to neighboring Turkey and Azerbaijan in Georgia, using concrete and steel bars to make this impressive form. Just beside the highway, this service station is very amazing. 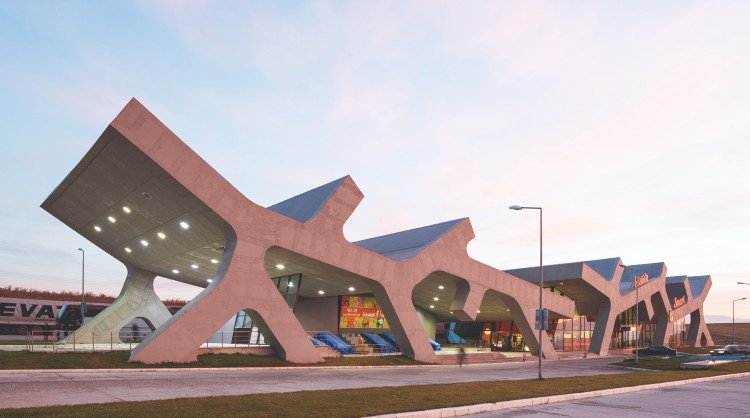 From the air overlooking the gas station in ORIVAL, Belgium, the symmetrical beauty is reflected in this gas station. This gas station completely covers the two lanes of the highway. 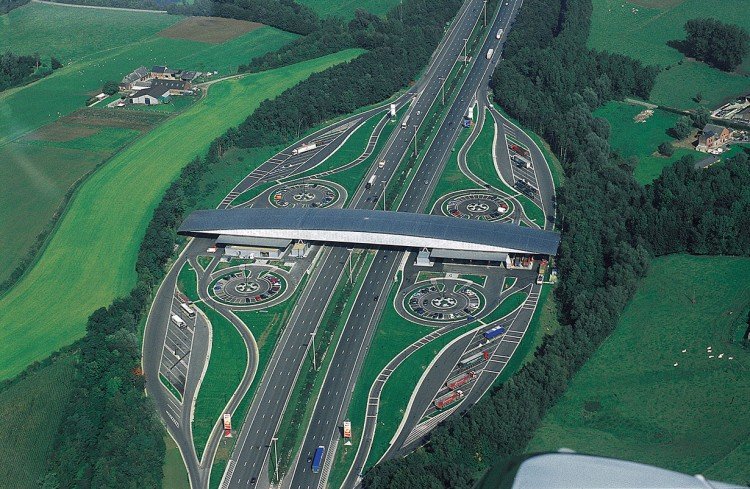 Did you see the huge colorful cola bottle? 66 feet high, representing Americans and current lifestyles. This small gas station in Oklahoma not only carries the history of the United States. It is also one of the few beautiful bright colors in this “mother’s road” 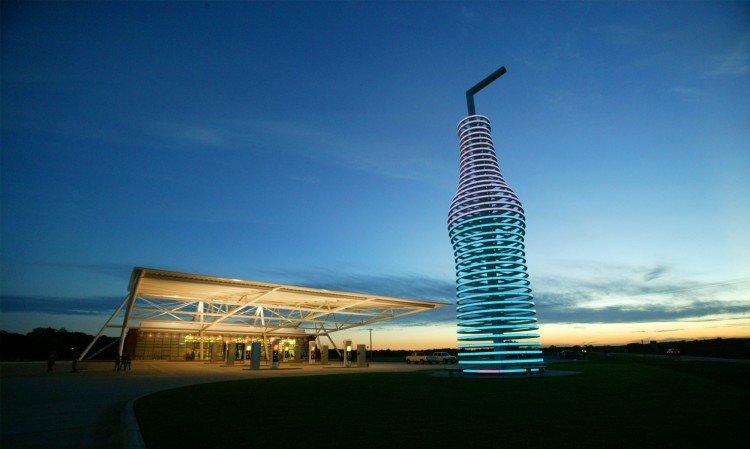 Good buildings are never outdated, the Houten Service Station is a good example. The architect adds a translucent curved exterior wall around the station. Made of galvanized expansion steel plates, partitions and turbulence, metal plates also act as a channel for cars to indicate the entrance. 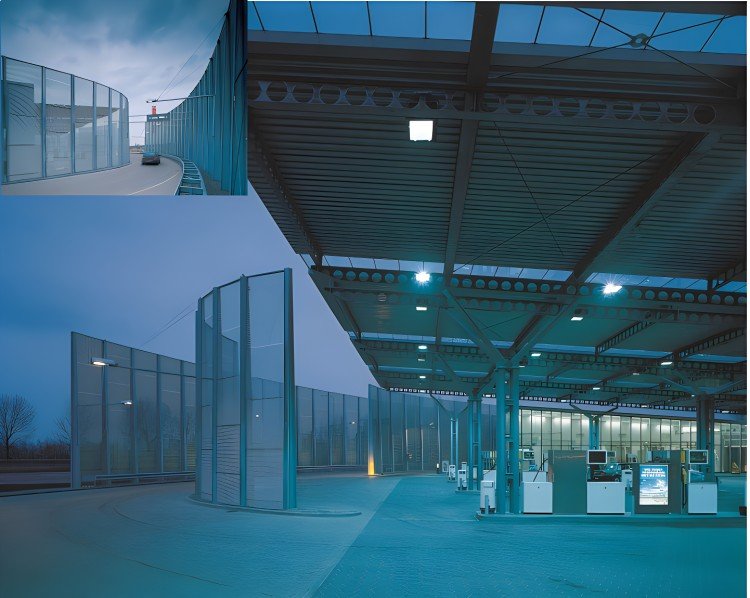 If you only see the ceiling of the gas station, it is really difficult to imagine that this is a gas station, saying that the gate of five-star hotels is reasonable. In fact, this slightly tilted triangle ceiling was originally designed for Los Angeles International Airport. Later, it was not traded into the airport because of some reason. Therefore, it was converted into a gas station. Very cool！ 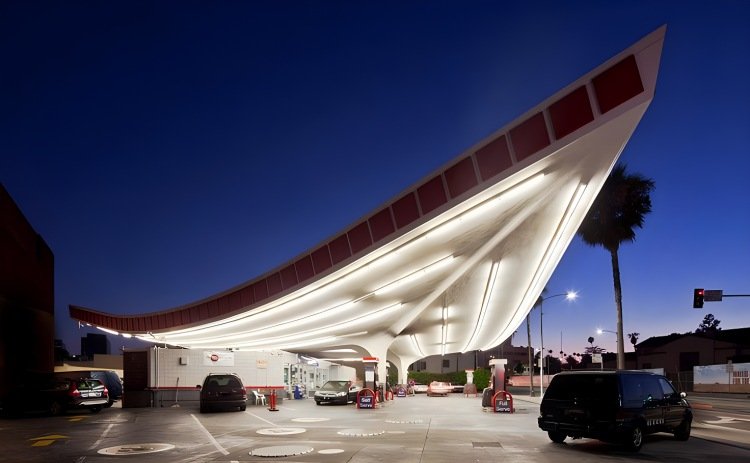 This is a castle gas station in Texas. It looks like a small castle with a low-profile version of Disneyland. It is really unable to think with the gas station. Sure enough, the locals may feel so, so this gas station has really become a department store. 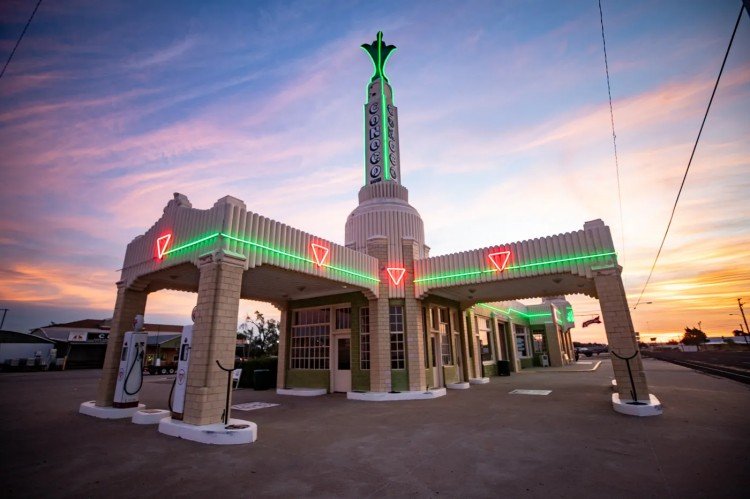 This gas station was built by Arne Jacobsen in 1937, even after so many years, white bricks and simple shapes have always looked very fresh and refined. 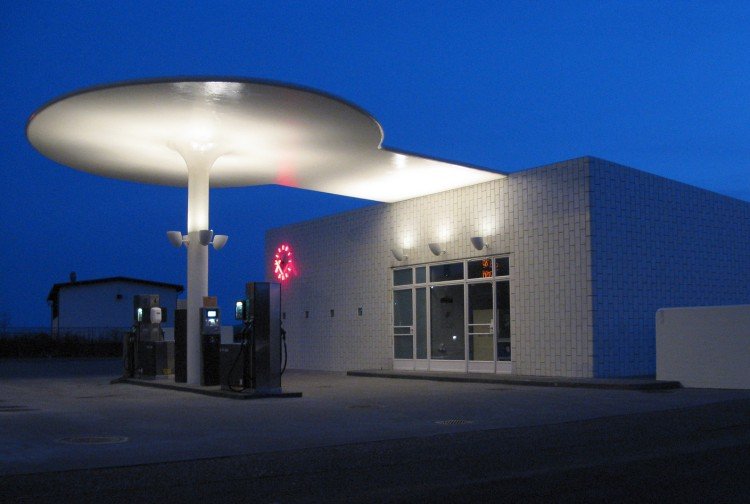 The shape of this gas station is a teapot. The original intention was to satire the US teapot incident. So there is a role in building such a gas station! 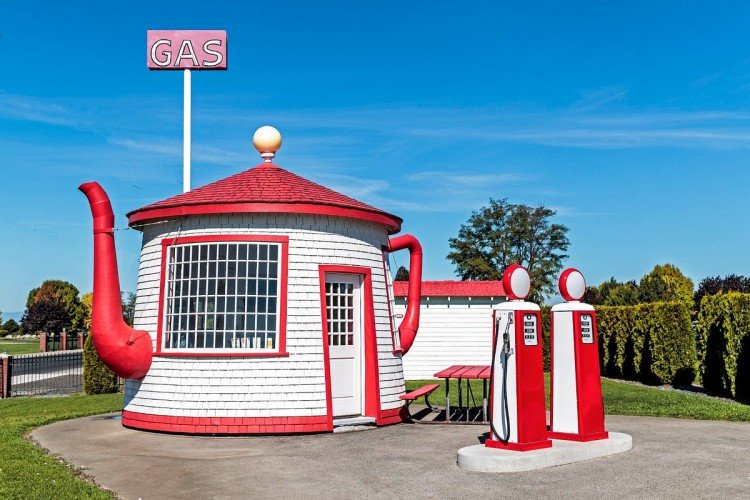 In 2010, Granden’s Tuscis gas station in Italy was perfectly combined with the surrounding mountain scenery like an undulating mountain. 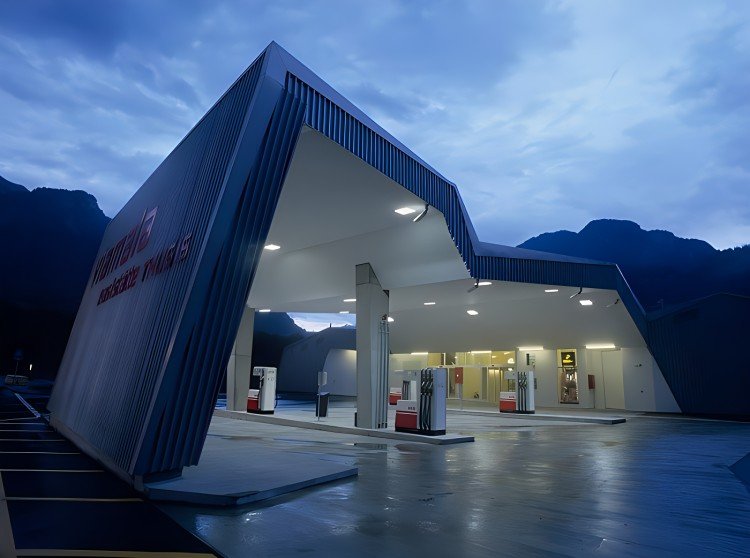 In 2011, at the PAUCA gas station in Slovakia, two round holes were as bright as their eyes, the finishing touch. 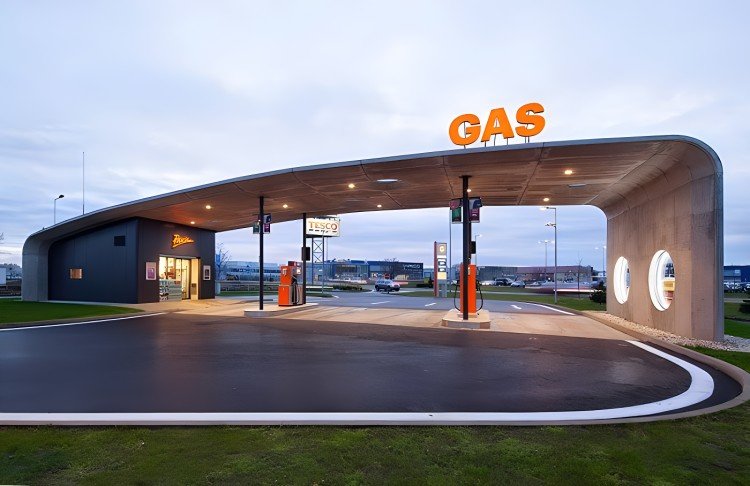 In 2013 Georgia Batumi gas station, dare you to say that it is not like a glass meteorite from outer space. 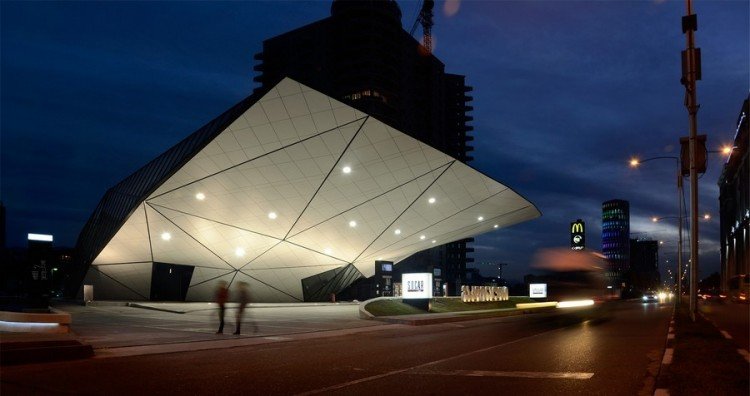 The gas station near Madrid in Spain has three seagull-wing-shaped ceilings. The designers said that the design of the service station exudes optimism and modernity, the structure forms a cantilever and projection, which brings a sense of magic to the surrounding space. 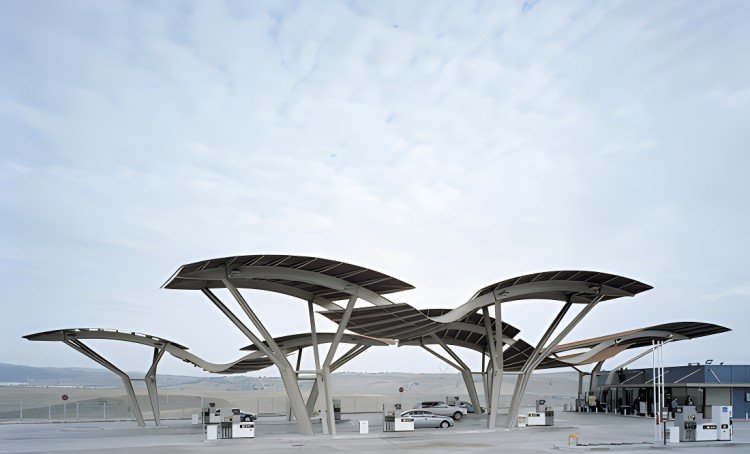 The United Petroleum service station in Korio, Victoria, Australia is a project that has established a bold and new image. This service station is an industrial building with dramatic and exploratory sculptures standing beside the highway. 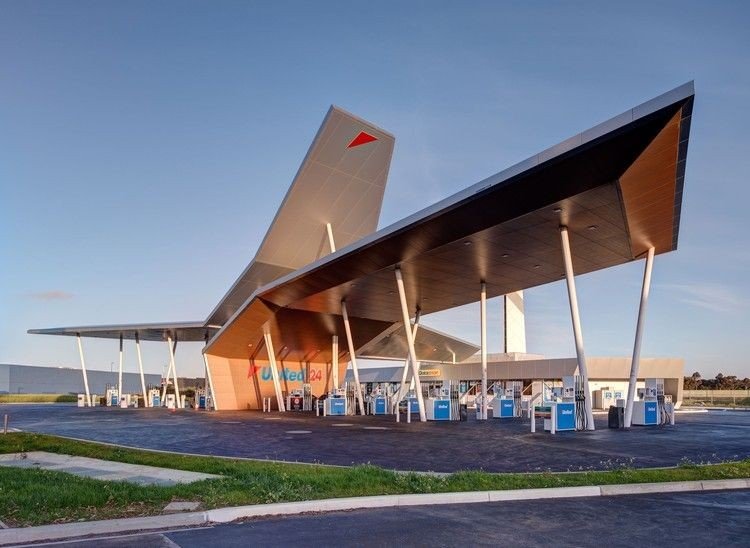 This gas station was built in 1978-79. In 2012, its retro style was selected for the “British Heritage Architecture List”. Since the 1960s, ESSO oil and Mobil have built a group of gas stations in the UK. The style has a green ceiling and a red ceiling, but now there are not many remaining ones. 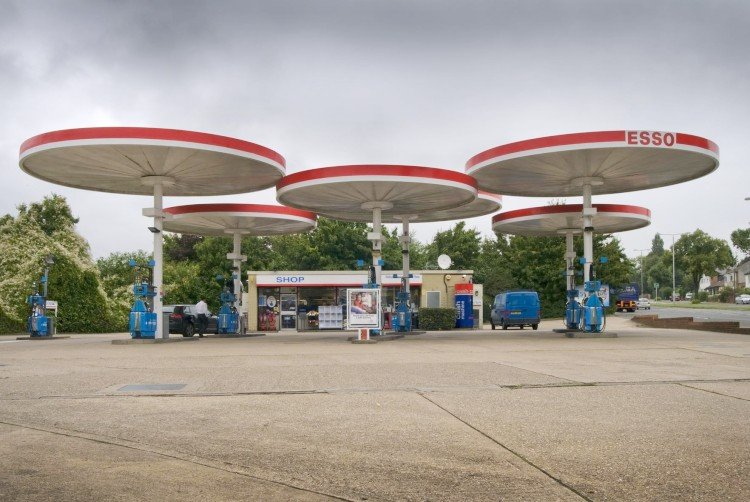 Finally, let’s appreciate the picture -like a lake motorboat gas station. The gas station is perfectly integrated into the scenery behind, and the warm light glows at night. 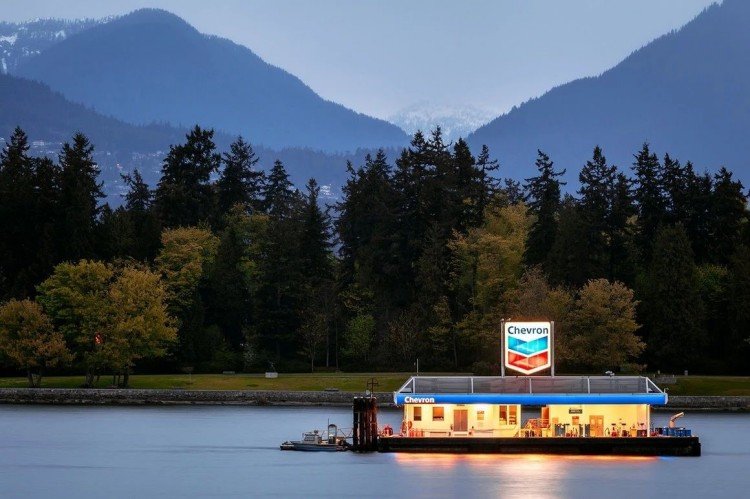 Of course, people usually have different opinions. If you find a more beautiful gas station in the world, you are welcome to share it with us.

Bluesky is a fuel dispenser manufacturer and supplier that uses Bluesky’s fuel dispensers in more than 90 countries around the world. If you need to purchase in China, we are willing to serve you.