Everything in the past is a prologue. Looking at the future from the past, the 2021 global epidemic is still raging. Under multiple challenges such as core shortages, raw material prices, and subsidies decline, China’s EV car industry has still achieved rapid development, exceeding the market in terms of sales volume and new car penetration.

It is expected that in 2022, the EV car market will maintain steady growth and it has almost become an industry consensus.

Multinational companies such as Volkswagen, General Motors, and Toyota; new leading car-building forces such as Weilai, Xiaopeng, and Ideal; technology giants such as Huawei, Xiaomi, and Baidu; independent brands such as BYD, Geely, Guangzhou Automobile, SAIC, and Great Wall. They are all ready to race on the same stage in the second half of the smart electric track.

Standing at the starting point of 2022, Bluesky Energy will review the past and learn the news with the top five hot topics in the EV car industry in the past year.

1. EV cars usher in a turning point in marketization

In 2021, my country’s EV car will grow at a significant rate. The production and sales volume from January to November hit a record high, reaching 3.023 million and 2.990 million vehicles, respectively, an increase of 1.7 times year on year.

The market penetration rate has increased significantly from 5.3% in 2020 to 12.7%. Among them, the penetration of new energy passenger vehicles in November The rate even reached 19.5%. In terms of market size, my country has become the world’s largest EV car market, with its production and sales volume ranking first in the world for seven consecutive years.

This year, the product power and cost performance of EV cars continued to improve, and consumers’ recognition of EV car was also getting higher and higher. The entire industry was at a historical turning point from policy-driven to market-driven. 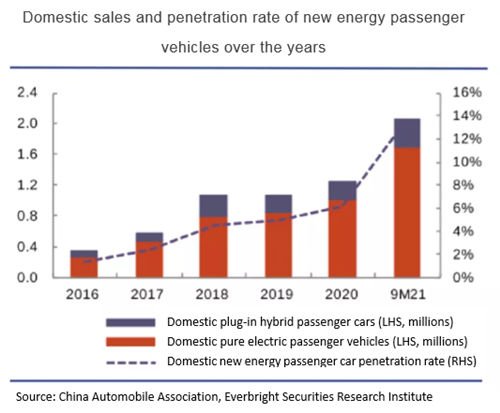 The cruising range of more than 400km has almost become the standard for new models, and some high-end electric vehicles have reached more than 700km.

The China Automobile Association predicts that the sales of EV cars are expected to exceed 5 million in 2022, a year-on-year increase of 47%. The “New Energy Vehicle Development Plan (2021-2035)” put forward the mid-term goal of “2025 my country’s new energy vehicle sales accounted for 20%” which is expected to be achieved three years ahead of schedule.

It is worth noting that in 2022, the national subsidy standard for EV cars will decline by 30% on the basis of 2021, and the implementation period will be until the end of 2022. This means that if there is no change, 2022 will be the last EV car subsidy.

In 2010, new and old players will inevitably find ways to meet the expectations and needs of more consumers, and market competition will also become fierce.

According to statistics from the China Automobile Association, the market share of Chinese brand passenger cars will continue to grow in 2021, with an average share of 44.1% in the first 11 months, an increase of 6.4 percentage points from the same period last year.

This is also the first time since the decline in auto production and sales in 2018, a self-owned brand is expected to achieve a rebound in both total sales and market share for the year.

In the face of greater pressure in the industry, independent brands have adopted more flexible strategies and increased product development efforts, especially when the contribution rate of new energy vehicles to the market is getting higher and higher, and independent brands account for almost 80% of sales.

For example, BYD is favored by the market with its core advantages in the three-electric and complete vehicle fields. As of December, its market value ranks third among global auto companies.

Traditional auto companies such as SAIC, GAC, Geely, Great Wall, and Dongfeng have also seized the opportunity of industrial transformation, and their sales have continued to hit new highs. The November sales of leading companies such as Weilai, Ideal, and Xiaopeng have surpassed “10,000 vehicles.” 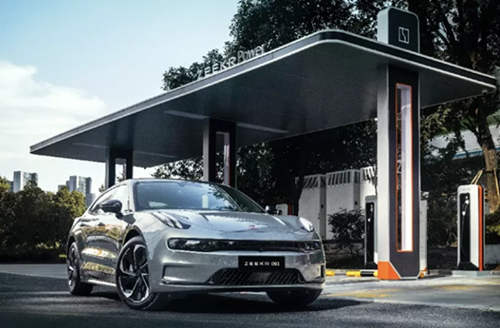 The exploration of Chinese auto brands has never stopped. From joint-venture brands to market for technology, to independent brands out of the cost-effective route, in the rapid development of the past 30 years, independent brands have repeatedly launched an impact on high-end brands.

Today, there is an opportunity for brands to improve. It has matured, and the preferences of Chinese consumers are undergoing tremendous changes. The blind worship of foreign brands is weakening.

As long as the quality meets the requirements, the products of local enterprises will be selected, and the consumption outlook is becoming more and more rational. This gives independent brands a “second venture “Brought hope.

From independent brands, clear planning, to products that understand Chinese people better, customer-centric services, everything based on strength is brand new and international.

Geely’s Polar Krypton, BAIC’s Polar Fox, and Dongfeng’s Lantau succeeded in small trials and gained a beautiful market record. SAIC’s Zhiji started the pre-sale and post-sale ordering tide continued to be popular, Chang’an’s Avita and Great Wall’s salons just now The debut has become the focus of heated discussions, and BYD’s high-end brand will soon surface in the first half of next year.

Chinese auto brands are using the unique advantages of electric vehicles to achieve intelligence, technology, and evolvability, and complete the counterattack of traditional luxury with high-tech ideas.

Of course, the upward road will not be smooth sailing. There will still be uncertain variables in this journey of stars and oceans, but the rising trend of independent brands can no longer be stopped.

Since 2021, with the gradual recovery of demand in overseas markets, Chinese auto brands have continued to increase their export volume in overseas markets with their ever-increasing quality, technology, and services, and the pace of “going out” has accelerated significantly.

According to data from the China Automobile Association, in the first 11 months of 2021, the cumulative export volume of Chinese automobiles reached 1.793 million, a year-on-year increase of 1.1 times. The export volume of many Chinese auto brands has increased significantly, setting new highs.

Among them, EV cars have been exported to South America, Southeast Asia, West Asia, and Europe, and the number of exports to Belgium, the United Kingdom, Germany, and other markets is still growing rapidly. It is expected that the export of EV cars will maintain rapid growth next year. 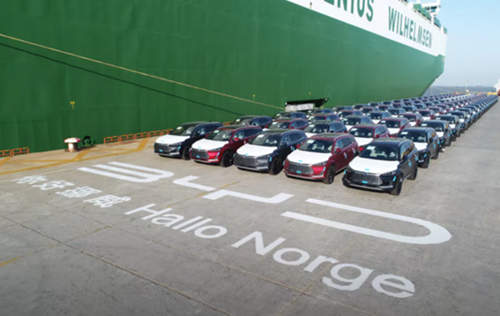 The unprecedented prosperity of the global new energy vehicle market has allowed more and more Chinese auto brands to show their confidence in going global. Auto companies such as BYD, Weilai, MG, Dongfeng, and other auto companies have taken the lead to successfully go global, while Tesla and BMW are currently The Hua factory has also made China an important global electric vehicle export base.

With the help of decarbonization, major regional markets, represented by Europe, are becoming the display stage for Chinese auto brands. It can be foreseen that when China’s EV cars become more and more competitive and exports take shape, they will bring far-reaching effects to the global auto industry. Influence, the era of Chinese EV car driving around the world will also be just around the corner.

The chip shortage problem in 2021 has not been alleviated as predicted by the industry. Affected by the continuing epidemic and natural disasters, the global automotive industry is shrouded in a component crisis.

General Motors, Ford, Tesla, and others are forced to adjust production and rethink the entire supply chain. According to data from AutoForecast Solutions, as of December 5, 2021, due to a shortage of chips, the global auto market has reduced production by as much as 10.122 million units in 2021. 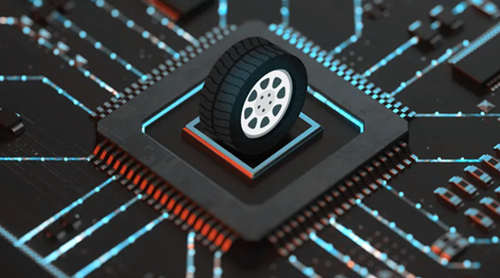 An ordinary car uses at least more than 40 kinds of chips, while high-end models need more than 150 kinds of chips. Chips have become a key factor in the development of the automobile industry. The shortage is far from over. As the waiting time increases, buyers With stockpiles, the hope that the shortage will end next year seems even slimmer.

Susquehanna Financial Group’s research shows that the chip delivery cycle in November is again extended to 22.3 weeks, and the supply pressure on many products will extend to 2022.

As the automotive industry accelerates its transition to electrification, the continuous increase in the price of raw materials such as nickel, cobalt, and lithium has caused a shortage of power batteries.

The battle for power batteries is also about to start. Major car companies have long-term plans and are competing to invest in the upstream and downstream areas of batteries. While the “core shortage” crisis continues to ferment, they can ensure that battery supply is “not short-lived”, and then reduce costs to avoid falling behind in the future market competition.

In the future visible to the naked eye, power batteries are rising to a strategic level and become a key variable to win the future.

5. Technology upstarts crossover into the game

In 2021, the presence of technology companies in the automotive industry has soared. Apple bears the brunt of the rumor that Apple Car will come out as soon as September this year; Xiaomi announced that it will invest 10 billion US dollars in the next 10 years to build cars; Baidu’s self-operated Jiddu car was established; Huawei The AITO high-end car brand, which is deeply involved, came out; Apple car rumors continued; Microsoft also extended its tentacles to the self-driving company Cruise…… 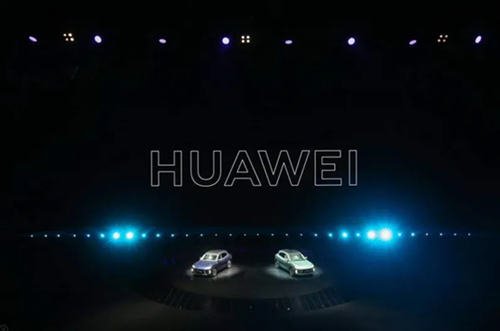 The smart EV car market is entering a golden age. Upgraded consumer demand, innovative cutting-edge technologies, and various countries’ regulatory and incentive policies have created a perfect trend storm and the best time for the industry to enter the market.

The future should not only belong to Tesla. The essence of innovation is a breakthrough, and it is also thinking of investment. Entering the market to “build a car”, global technology giants are not to be outdone.

The automotive industry has become a high-tech carrier. The investment of new technologies and new models into the automotive consumer market with an annual scale of more than trillions of dollars is a huge cake that all technology players covet, whether it is Huawei’s Hongmeng system smart cockpit or cloud computing, It is Baidu’s AI and Apollo open platform for autonomous driving. The technology giant “Getting on the car” is relying on the first-mover advantage given by smart technology to seize the opportunity of the mobile travel revolution and launch a new growth engine on the smart car track.

The era of software-defined cars is also an era of integration and innovation. In the second wave of new car manufacturing, some of these technology companies have chosen to cooperate with traditional car companies. The dominant position of the original OEMs at the apex of the auto industry pyramid may be shaken, but It can also reap the fruits of cooperation with technology partners.

What are the changes brought about by the entry of technology companies? Draws a question mark for the future.

To be continued, please see the next article. 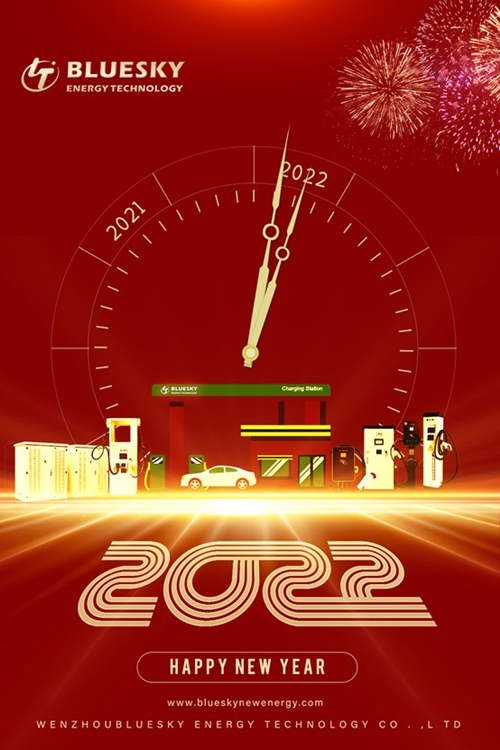