The fuel nozzle requires an easy operation, an adjustable oil supply, and safe and reliable use.

Due to the long use time and frequent use, some fuel nozzles will have the phenomenon of less flow, no oil, no self-sealing, and oil leakage. 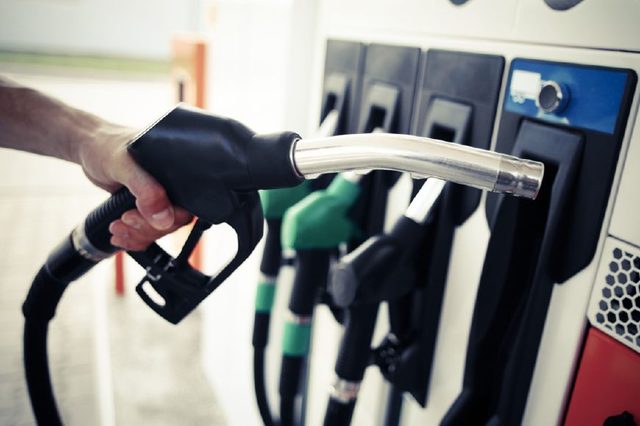 What problems will the fuel nozzle have after using it for a long time?

1. The fuel nozzle is frequently self-styled

2. The small flow of the fuel nozzle is not self-styled

3. The fuel nozzle is not self-styled

4. Oil leaks after the fuel nozzle are turned off

6. The fuel nozzle does not produce oil or the flow is small 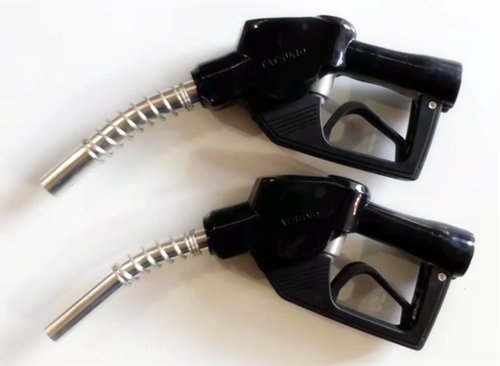 What is the solution?

1. The reason why the fuel nozzle is frequently self-styled.

Solution: You can remove the barrel, blow the self-sealing pipeline with the pressure air flow, and blow the debris out, the nozzle can be restored to normal, clean the barrel of the refueling nozzle frequently, and clean the dirt of the fuel tank port of the car before refueling, which can effectively prevent self-styled frequent failures.

Take an open metal container, add oil to the container, and add oil at different gears and flow rates to ensure that the self-sealing hole does not contact oil and oil bubbles, and determine whether it is self-sealing for no reason.

Repeatedly switch the refueling nozzle, or immerse the muzzle of the nozzle in oil to make it self-sealing normally. Repeat the operation 20 times. If there is a phenomenon of self-sealing for no reason during the refueling process, it can be judged that the fuel nozzle is abnormal. 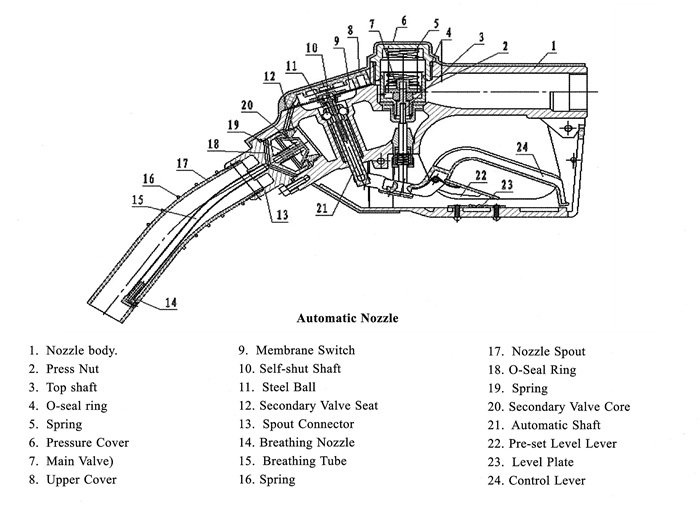 2. The reason for the small flow of the fuel nozzle is not self-professing

The elastic force of the upper chamber spring of the switch membrane of the fuel nozzle self-sealing mechanism is too large. In the case of small flow, the flow rate is low, the air suction effect is weak, and the pressure difference between the upper and lower chambers of the switch membrane is small, which cannot overcome the elastic force of the spring to move the self-sealing rod upward.

Solution: reduce the elastic force of the upper chamber spring of the switch membrane.

3. The reason why the fuel nozzle is not self-styled

3.1 The upper cavity plastic cap wire is not tightened.

3.2 The “O” type sealing ring on the fuel nozzle adapter sleeve and the auxiliary valve seat is damaged, so that the pressure difference cannot be formed between the upper and lower chambers of the switch membrane.

3.3 The air hole on the fuel nozzle adapter sleeve is blocked.

3.4 The spring force of the upper cavity of the self-sealing mechanism switch diaphragm is too large.

4. Reasons for oil leakage after the fuel nozzle is turned off.

4.2 The auxiliary valve spring fails and does not have a sealing effect.

5. Reasons for oil leakage from the fuel nozzle

The reason is that the seal at the ejector rod fails and the barrel seal is damaged.

Inspection method: Remove the barrel and check the seal.

5.2 Oil leaks at the mouth of the nozzle;

The reason is the loss of sealant at the barrel and valve seat.

Inspection method: Check whether the barrel is loose.

5.3 The oil leakage of the top cover is mainly manifested as the main valve cover is combined with oil leakage.

The reason is that the sealing ring is damaged.

Inspection method: Open the main valve cover on the top of the nozzle body and check the sealing ring.

The reason may be

(1) defects such as sand holes in the nozzle body casting itself.

(2) The nozzle body is damaged. 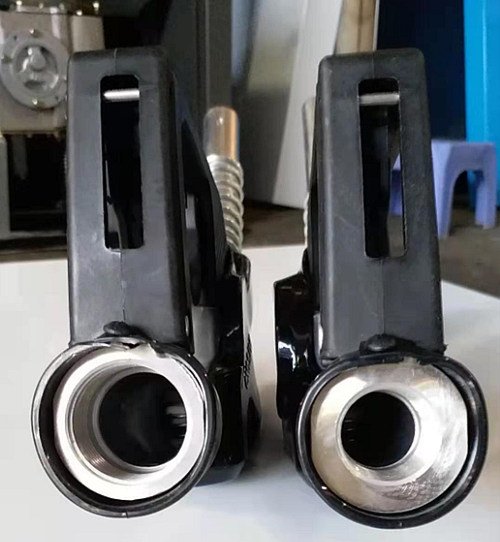 6. The fuel nozzle does not produce oil or the flow is small

6.1 The filter of the fuel nozzle is blocked and needs to be cleaned. This is a link that people tend to ignore.

The oil dispenser is slow, and some people have repaired it for a long time, but they have not repaired it.

The reason is that the filter is blocked here.

6.2 The oil pipe joint is blocked by foreign objects, which is also a link that people tend to ignore.

Some hoses are aging, and the internal rubber block falls off. At the movable joint, it is relatively thin and just stuck, which affects the normal oil output of the fuel nozzle.

Therefore, when using it, you should pay attention to daily maintenance and handle it with care, and it is strictly forbidden to beat it.